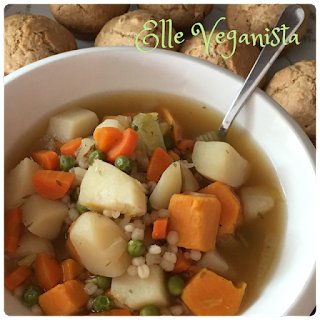 I debated whether I should name this recipe Hearty Vegetable Soup or Hearty Vegetable Stew, as it could pass as a soup on day one, but once it thickens up in the fridge overnight, the leftovers are most definitely stew-like in nature.  Regardless of its name, or which day you eat it, it's delicious.  I think the thing that makes this soup / stew so unique is the sweet potato.  I personally love sweet potato in soups,  and this along with the other starchy vegetables and barley in the soup, are what gives it that thick, stew-like, stick to your ribs kind of texture, and also what appeals to people on those cold nights when you just want something to warm you from within.  Let this stew be that something, I'm telling you, it will not disappoint, especially when served with my Bomb-Digity Baking Powder Biscuits.

I was feeling a little under the weather myself when I made this stew last, and I didn't have the energy to take pictures as I went, so I hope you can forgive me, and do without.  This is a perfect soup to make on days when you're feeling sick, or even just lazy days, as there really aren't very many steps to it.  It's kind of a chop, dump and boil kind of a meal, which oftimes suits me just perfectly!

Also just a quick note about the broth...I make my own Homemade Vegetable Broth, which may reflect the amount of spices reflected in the recipe.  If you're using store bought broth that may already contain sodium and other seasonings, you may want to decrease the spices in the recipe at first, and increase according to your tastes as you go.

I'll just get straight to writing up the recipe then, as it seems pointless to continue the post without even having pictures to show you along the way.

Method:
1. Combine all ingredients in a large stock pot over medium high heat.  Bring to a boil and reduce heat to a simmer.
2. Simmer, covered, for 30 minutes.
3. Remove from heat and serve.

Recipe Tips:
* If you are using store bought broth instead of homemade, you may want to decrease the amount of spices and salt you use, as store bought broths often already contain sodium as well as other seasonings, and you may find the full amount suggested in the recipe to be too strong.  In this case, start with half of what is suggested, and increase slowly according to your tastes.

April 16, 2018
Mmmm...Banana Bread.  Who doesn't love it, am I right?!?  Even my child that absolutely hates bananas, LOVES banana bread.  And this is the kind of banana bread you really can feel good about eating because it's chuck full of healthiness!  Yay!!!!  Plus, if you have a sourdough starter and are into getting that yummy, tangy goodness into your gut, this is another recipe to add to your repertoire.  If you don't have a starter, there's modifications you can follow in my recipe tips.  This recipe is actually modified from my lovely friend Kelsey's Sourdough Banana Bread recipe.  She gave me permission to change a few things to make it conducive to my Whole Foods Plant Based lifestyle, so it is now completely free of refined sugar, oil and animal products.  So here goes... My kids usually convince me to throw chocolate chips into the banana bread (I actually found some that are both dairy-free and sugar-free, but man are they expensive), but nuts or bluebe
2 comments
Read more